„Mozart’s music is like a kaleidoscope, the more you get into it, the more colours and shapes you will see”

This year’s approaching edition of the International George Enescu Festival boasts quite a few exciting surprises and powerful incentives to look forward to, among which premieres like the Festival happening not only in Bucharest but also in 5 countries (Germany, Belgium, Canada, Italy and Rep. of Moldova), 34 famed artists performing for the first time in Bucharest, an extended repertoire of opera concerts and an even more solid contemporary classical music section. Among the most exciting highlights of this Festival’s edition will be the Mozart Week in Residence, a program curated and brought from Salzburg by the acclaimed Mexican tenor (and passionate Mozart aficionado) Rolando Villazón. Since 2017 he is the Artistic Director of the Salzburg Mozart Week Festival, a yearly event taking place around Mozart’s birthday, the 27th of January.

Mozart Week in Residence @ Festivalul George Enescu will include opera concerts (including surprising mime and recitations acts) but also an exhibition with items related to Mozart’s life (like his violin and letters to his father), which will aim to cast a fresh light on the music but also the personality of Wolfgang Amadeus. 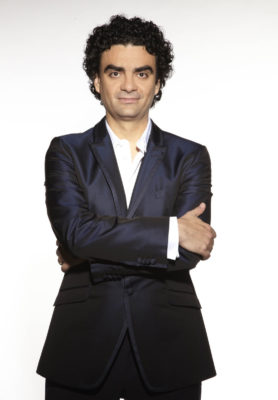 An internationally acclaimed tenor but also a stage director, writer, cartoonist, Humour Ambassador of the Red Noses Clowndoctors International charity and definitely a contagious fan of music, it does not come as a surprise that Rolando Villazón is a Mozart-ambassador and curator, as he has been dealing with Wolfgang’s music for quite a few years. Besides, his personality displays a sense of joy, playfulness and bright approach to music that are quite mozartian. A volcanic yet light-hearted and magnetic personality, interpretative exuberance and strength, a great ludic spirit both on and off stage and lots of humoresque energy, a certain capacity of bringing people together – these features create a connection between the Mexican tenor and the Austrian musician, creating a combination that is at least very interesting if not downright charming.

Villazón’s aim with his Mozart projects is nothing less than to stir and energize people’s curiosity and even hunger for Mozart. He was not initially a Mozartian singer, he went through Monteverdi and Händel before delving into the simplicity, the ingenuity and also the complex beauty of Mozart’s universe with most of his greatest operas (Don Giovanni, Cosi Fan Tutte, The Abduction from the Seraglio, La Clemenza di Tito, Il re pastore, Lucio Silla).

In 2014 he released his first solo album with Mozart’s tenor arias including some lesser known pieces, thus concluding a recording cycle of Mozart’s seven maturity operas, with Deutsche Grammophon. In 2017 he became the Artistic Director of the Salzburg Mozart Week Festival. In 2018 he presented a BBC documentary on Don Giovanni and its first performance in Prague, and this year he celebrated Mozart’s birthday by serenading him with a Mariachi band through Salzburg. Also, this year he fully programmed the Mozart Week and chose “Mozart is alive” as its theme – and indeed he is.

Rolando Villazón spoke recently about his personal connection to Wolfgang Amadeus and the program he will bring to the Enescu Festival this September.

“When you meet Mozart you really find a friend for the rest of your life”, you said, and also that you truly met him in 2010 with the recording of Don Ottavio, which prompted you to read Mozart’s letters. What is the secret to his music being so addictive, joy giving and exciting for classical music newbies, aficionados and musicians alike?

It’s a very good question, which actually I’m not sure anybody can answer correctly. There are many musicological reasons why his music attracts people, there’s the architecture of the compositions, the richness of the melodies but also a certain harmony that feels easy and comprehensible to the ear. There’s also surely that huge joy in the music which anybody can experience, with or without musical knowledge, and of course the deep construction, the musical profundity of his compositions. He had this particular talent of making something extremely difficult incredibly accessible. Mozart was very skilled, inventive and creative. Some of his critics said that he should have taken one melody and follow that melody through, but you know, he had his own style, which is what makes his music so spontaneous, so joyful. Mozart was not revolutionary, he was not a visionary or one trying to change the world of music. He actually discovered more in the past than in the future, he took from Bach, from Händel, the fugue, the counterpoint and added that to his own way of composing. Mozart was a man of his day to day life, he was not trying to invent a universe or the music of tomorrow, he was simply creating the most wonderful universe of that day. And, by doing so, he came up with the perfect musical universe of tomorrow.

His biography and his compositions can give us some of the answers, but there is still some secret to why his music is so instantly accessible. This is a music that one can listen to in any state, neutral, happy, sad, and it will still always give you something wonderful.

After years of enjoying and interpreting Mozart, now also as the Artistic Director of the Salzburg Mozart Week Festival, in what way does his music still surprise you?

The more you enter his musical world, the more you get surprised every single time, even with pieces that you already know. As a singer, coming back to Mozart’s arias at different stages in your life, you are in awe by the purity of the musical line, the dramatic ingredients that every single role has. And the more you continue to explore his entire repertoire, the symphonic pieces, the sacred music, the chamber music, etc, new doors open in your own interpretation of this music. On another level, the more you read about his life (particularly from that great source of information which are his letters), the more you fall for him…It’s like a kaleidoscope, the more you get into it, the more colours and shapes you will see.

How did you curate the concept of the Mozart Week in Residence at the Enescu Festival?

With the hope that people will experience all these wonderful things that I mentioned about him, not just some of his wonderful compositions but also something of his spirit, the joyous, dancing, serious man, enlightened man he was. We’ll go through some of the letters that he wrote to his father and I think they are highlighting quite accurately the special relationship they had.

To resume all this, what we’ll bring to the Enescu Festival is a bit of what we do in the Mozart Week in Salzburg.

Do you have any personal favourite objects from the ones that will be in the Bucharest exhibition?

To be honest – everything, it all is truly meaningful and important. Obviously, quite special is the violin of Mozart, it’s on this that he composed some of his concertos, it’s on this that those beautiful hands of Mozart had played. It does give you goosebumps. 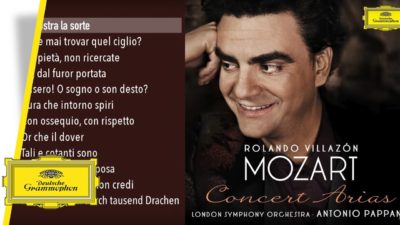 Do you think we enjoy more Mozart’s music, if we know more about him as a person or is his music simply enough?

Indeed I think it is enough to listen to his great music, especially live, in the opera or in a concert hall. But there’s something interesting that happens to everybody who loves his music: as they enter into his universe, his biography, they fall in love with Mozart the man as well. It’s a joy to read those letters, regardless if you’re just a reader or a musician, then you learn so much from them. It’s also interesting to see who he was acquainted with, what friends he had. He was part of the very important intellectual society of his time, the 18th century, the time of the French Revolution and the Enlightenment.

Why is it interesting to meet Mozart in his biography? I think it’s the same reason for which it is always interesting to meet a friend of yours. As indeed, Mozart is a friend. Like no other composer, he will become one’s friend, be part of your life, you will find a companion in him. This can happen only with his music too, but I tell you, you will want to know more about him!

The beauty of it is that, if you are just curious to know about Mozart’s life, then the music tells you nothing. The music is free and pure, his musical universe is independent of his biography. Everybody can come to his music at any time of their own personal history.

What expectations do you have for your first Romanian trip and concert experience?

There would be no Mozart nowadays, as we know him, had he not been travelling around Europe, meeting and experiencing other cultures, musicians, style, languages. So, following the master’s example, I’m very much looking forward to coming to Romania with the Mozart Week in Residence and the recital I’ll be giving, and to discover the Enescu Festival.