For full functionality of this page it is necessary to enable JavaScript. Here are the instructions how to enable JavaScript in your web browser Giuseppe Gibboni and Vikram Sedona from Italy, and Orest Smovzh from Ukraine qualified for the Violin Final of the Enescu Competition 2018 | George Enescu Festival

Home›News›Competition›Giuseppe Gibboni and Vikram Sedona from Italy, and Orest Smovzh from Ukraine qualified for the Violin Final of the Enescu Competition 2018

Giuseppe Gibboni and Vikram Sedona from Italy, and Orest Smovzh from Ukraine qualified for the Violin Final of the Enescu Competition 2018 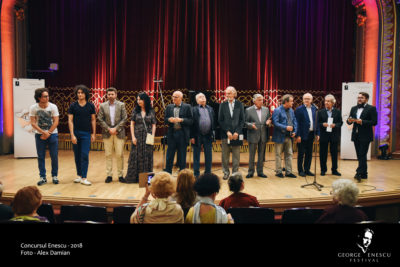 The George Enescu Philharmonic Orchestra will be conducted by Christoph Poppen.

Tickets to the Violin Final are sold-out, but the final will be live broadcasted internationally on www.festivalenescu.ro.

Giuseppe Gibboni (Italy) is born on 16th of May 2001. He participated in the RAI Program 1 In collaboration with UNICEF “Prodigies – Music is Life” and became the “Italian miracle”. Gibboni    recorded a CD with Warner Classics, which bears his name. He plays a violin F. Landolfi, entrusted in 1751 to the Fondazione Pro Canale of Milan. Giuseppe Gibboni won First Prizes at the “L. Kogan” International Violin Competition in Brussels and International Violin Competition “A. Postacchini”, as well as First Prize and Special Prize for the Execution of the Paganini Caprices, in 2016.

Aged 18, Vikram Sedona (Italy) attended the Pinerolo International Music Academy with Prof. Dora Schwarzberg from 2012-2014 and is currently studying at the University of Performing Arts in Graz. The young musician has already performed in Italy, Austria, Malta, Switzerland, Germany, Poland, Russia and France. He won First Prize at the “Andrea Postacchini” International Violin Competition in 2017.

Between September 1 and 23, 270 young artists from 39 countries from all over the world are coming to Bucharest to give life to their dream of becoming great artists of the world, at the 2018 edition of the George Enescu International Competition.